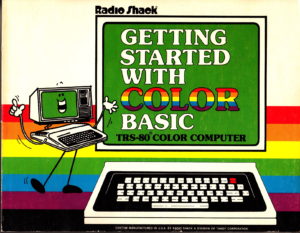 In 1981 I got my first home computer, it was a Tandy/Radio Shack TRS-80 Color Computer, it was silver, aka “Battleship Grey”, it had 16K of RAM, and I started with a cassette player as my way of saving and loading programs.  I started to learn the BASIC language, BASIC stands for Beginner’s All-Purpose Symbolic Instruction Code, and it’s a common language that was shipped as the boot up option of most 8-bit computers of the 80’s.

The version of BASIC my computer came with was called Color BASIC and it was developed by Microsoft.  The language was very powerful, and the things I could do with that computer were pretty amazing.  I learned and used the standard version of Color BASIC for at least a year or two, before I would eventually upgrade to a White CoCo 1 with 64K and Extended Color BASIC.

I was in heaven!  Being able to access hi resolution graphics screens, and learn how to create and animate graphics, music, and sound was quite a treat, I ended up writing several games, some clones of other games, many original.  Sadly I don’t have any of those original floppy disks any more.

In November, of 2015 I started a series on YouTube where I go through each chapter of the Extended Color BASIC programming guide (which also included the standard, Color BASIC commands, too) and this was designed to be both a relearning process for myself, as well as a how-to for anyone else who may be interested in learning this fascinating language.  Since there are a lot of younger kids who watch my game videos, I though some of them may be inspired to learn how to make their own games, like I did when I was a kid.

This series went on for a bit, and I eventually got sidetracked and hand not updated it for over a year.  With many more programs being developed for the Color Computer, and making friends with many CoCo developers, I got a renewed interest in the project and the series and have picked it back up again.

The goal is to relearn the language, then start working on some game projects and design some games in BASIC for the CoCo.  Some will be based on things I did as a kid, others will be new ideas.  I’d like to eventually learn 6098 Assembly language as well, and start making professional grade software for the CoCo at some time in the future.

The playlist with all the current videos and chapters can be found here.

I will attempt to BLOG about future chapters and software ideas as I move forward with this series.